By LYNNE KOEN, Published in Management

"Feminism isn't about making women strong. Women are already strong. It's about changing the way the world perceives that strength."

Traditionally, a woman's role is seen as the home maker. This role is multi-faceted, with women caring for and nurturing their families. Women in the home are often responsible for cooking, cleaning, nursing, budgeting, teaching, counselling and so much more. Women are very often a pillar of strength, keeping their families together in the most trying and difficult times. 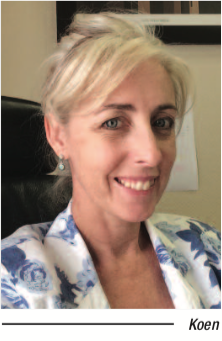 In South Africa, black women in particular have had to face many obstacles in pursuing their dreams. Poverty, a patriarchal society and discrimination are challenges which many face every day. The black girl born into an impoverished household does not face an easy road ahead. The answer to these many problems is to empower girls and women in order for them to reach their full potential.

An empowered woman is a strong force. To be truly empowered is quintessentially about freedom. This freedom most importantly includes freedom of choice and thought. It is all too easy to say women are empowered in South Africa. We have an advanced constitution and a myriad laws and platforms to promote women's rights. In reality, however, we are accosted daily by a multitude of abuses relating to women's rights. Some are obvious, like physical abuse, sexual abuse and financial abuse. Others are more insidious. They include the patronising name calling in the work place or the tacit acceptance that a woman won't be able to perform in certain roles. Many times the abuser is not even aware of the offence. The abuser is not always a man and can easily be another woman.

It is accepted that the environment to which children are exposed greatly contributes to their attitudes in adult life. A change to societal opinions and attitudes to women and their rights starts in the home. This is particularly the case in South Africa where we have a legal framework to protect these rights. This issue can only be addressed positively when children are brought up in homes where mothers and sisters are treated as equals. Homes are important in engendering freedom of thought in both girls and boys. Parents who allow their daughters to dream and achieve, who provide them with the belief that in this they are no different from their brothers, are part of the solution. Providing a child, boy or a girl, with the mind-set that they are free to make choices beyond the confines of the negative roles placed on them by society is the greatest gift a parent can give. There are so many women and girls out there who accept their lot in life only because they do not have the ability to believe in themselves and the opportunities available to them.

Maponya Inc seeks to provide an environment promoting this ethos. The firm prides itself on a "family" culture whilst still maintaining its professionalism. This culture is aimed at developing and empowering its staff to reach their full potential. It is an ethos applied to all levels of the workforce, from messengers to management. The firm is particularly proud of its achievements in empowering women. More than 90% of the staff complement are women. Senior management statistics are just as remarkable, with seven of the 13 directors currently appointed being women. In addition, the CEO and co-chairperson are both women.

A supportive environment exists in the firm which allows women to pursue their dreams. Evidence of this is the successful career path followed by one of the firm's attorneys who began her career as a secretary. Another example is that of a cleaner who was successfully trained and appointed as an administrative assistant. The proof is in the pudding, you may say. The current CEO, Mrs Tasneem Antulay, was first employed as an attorney at Maponya Inc and was subsequently appointed as a director in 2010. In 2017 she was appointed CEO of the firm, following in the footsteps of the previous CEO, Mrs Baitseng Rangata. Mrs Rangata was appointed as co-chairperson of the Board after completing her term as CEO in 2017. She continues to fulfil her dreams by being appointed as an acting judge in 2018.

The impetus behind Maponya's belief in promoting women's rights, making it one of the most representative in the country, is firmly steered by the firm's founder and owner, Mr Phatudi Maponya. Few can argue that he has long supported the rights of women and is an honest and firm believer in uplifting women. This is a leader who, by his own admission, is what and where he is today due to the efforts of his mother.

Thanks to Mr Maponya, we have trained, uplifted and supported generations of women who have passed through our doors. Those who leave the firm do so equipped with skills and knowledge which they can put to good use. Those who stay regard Maponya Inc as "home".

Ms Palesa Ledwaba joined the Board as a director on 1 September 2018. She is the eighth female director to serve on the current board. She has come up through the ranks of the firm, which she joined as an articled clerk in 2013. She was admitted as an attorney in September 2014. Her appointment is another example of Maponya's promise to support and guide its female employees to reach their full potential. Ms Ledwaba attained her LLB in 2012, graduating top of her class at the University of Limpopo. She joined the Black Lawyers Association (BLA) Student Chapter-UL at the beginning of her academic journey and in 2010 became the first female chairperson of the organisation since its relaunch. The BLA gave her a platform to fulfil her passion to equip and arm her fellow black peers with exposure to the legal profession at the inception of their career paths. She continues to be an active member of the BLA as an executive member of the Provincial structure.

A talented attorney, she possesses a sound understanding of tax, corporate, and third party law, and is actively involved in pro bono work as well as campaigns to empower disadvantaged communities through numerous organisations.

She is currently pursuing her Masters in Law at the University of the Witwatersrand with special interest and focus on company law.