The global law firms in South Africa and the world, ten years ago and now April 2019

Ten years ago, in 2009, my most noteworthy client engagement was to advise the venerable London law firm of Denton Wilde Sapte on its options in finding a suitable U.S. law firm with which to merge. Their subsequent merger with Sonnenschein Nath & Rosenthal gave rise to SNR Denton, which has evolved in due course into the global polycentric behemoth that is Dentons, today. The world in 2009 was a very different place. 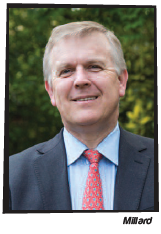 Lehman Brothers had filed for bankruptcy in late 2008. Developed global economies were in the midst of the worst economic recession since the 1930s. A sense of panic pervaded financial markets, and also many law firms. Following more than a decade of tailwinds, demand for legal services had contracted sharply. 2009 and 2010 saw headcount cuts in both the practice and in business services, on a scale unprecedented in the profession.

In South Africa in 2009, a full fifteen years after democratic elections and the end of sanctions in 1994, only two international law firms had entered the market. White & Case opened an office in Johannesburg in 1995 and LeBoeuf, Lamb, Greene & MacRae also did so, in 2000. The latter closed after the collapse of Dewey & LeBoeuf in 2012 and most of its lawyers moved to establish an office for Baker McKenzie.

Between 2009 and 2018, ten more international firms opened their doors in Johannesburg. Those eleven global firms today have a total of 208 partners practising in their South African offices. Office openings were not the only market entry strategy, though. Linklaters formed an alliance with Webber Wentzel in 2012, more or less concurrently with a similar alliance with Allens, in Australia. Other global firms actively managed their Africa strategies through desks based in London, Paris and other global business and financial centres. The influx of office openings caused something of a shock for the local firms, from whose ranks the international firms have drawn their partners and associates and who found themselves subject to a degree of competitive pressure that they had not previously encountered.

Not everything has gone the way of the new entrants. After a decade-long alliance with DLA Piper, Cliffe Dekker Hofmeyr elected in 2015 to continue as an independent South African firm. DLA Piper responded by establishing a new office from scratch. With the exception of Norton Rose Fulbright (which merged with Deneys Reitz in 2011) and the premium international law firms whose strategies are focused tightly on the highest value work, it is probably fair to say that several international law firms would prefer that their South African offices were larger, and more profitable than they are today. Besides macro-economic and socio-political considerations, that they are not can be attributed largely to the high quality of the leading local law firms, the strength of those firms' client relationships, and their alignment with local market conditions.

From a global perspective, the competitive landscape amongst the large international law firms has also evolved considerably over the past decade. Largely through a combination of a deteriorating sterling/U.S. dollar and the entry to the "top 10" of a number of mega-mergers, the "Magic Circle" and some other UK firms have slipped down the rankings. Global league tables are only part of the picture though. Profits per Equity Partner (PEP) can be gamed by manipulating equity partner ranks. Measuring revenues in U.S. dollars becomes less sensible as the percentage of the revenues earned in other currencies increases. The entry of non-traditional legal advisory companies to the market all make the league tables less relevant in 2019 than they were in 2009.

Although many of the Global 100 law firms have grown considerably, a few have shrunk in headcount and, of these, a smaller subset of strategically astute firms have done this whilst increasing revenues and profitability. Of the several dozen large law firm mergers that have taken place globally since 2009, the most notable from a South African perspective involved Dentons, Hogan Lovells, Herbert Smith Freehills, and Norton Rose Fulbright. Largely as a consequence of such mergers, global revenues earned by the Global 100 law firms increased from ~$80 billion in 2009 to ~$104 billion in 2018 – a compound annual growth rate (CAGR) of 5%. However, revenue per lawyer (RPL) grew at a CAGR of only 0.5%, from $770,000 only to ~$807,000. In fact, if one depreciates the 2018 revenues to 2009 U.S. dollars at U.S. CPI rates, then the average RPL for the Global 100 decreased by 8% in real terms. If one considers RPL as a proxy for productivity or value added, then this statistic becomes highly relevant. Nor is this phenomenon restricted to the Global 100. Looking to the future, what kinds of firms will be the most successful at transforming their business models to align with new and emerging market realities? How important will sheer scale be in driving (or hindering) such change? Will the global firms out-compete local firms in emerging markets such as South Africa, or not? Will the winners in future perhaps be new kinds of competitors like the "Big 4" global advisory firms or the emerging legal advisory companies, for instance Elevate?

As a general rule, smaller businesses tend to be more agile than large ones. However, they have fewer resources to invest. Taken generally, therefore, one might assume that larger law firms will be at an advantage if the changes required prove expensive (for example major investments in technology) or require global reach. In the same way, so long as enough critical mass exists to adequately satisfy client requirements, smaller law firms will likely be at an advantage if the changes are more to do with behaviour and mindset. Global law firms have worldwide networks on which to draw in delivering new, innovative services based on lessons learned elsewhere. Local law firms have greater say over their own strategies and business model and their economics are also locally calibrated, not in London or New York.

What is clear is that as Africa grows and its economies become more diverse, so its markets will become of greater interest to the global firms and also the leading South African law firms. The opportunities will grow, but so too the level of competition. Local law firms in those markets are also getting stronger all the time. This equips them to compete better in their own markets, and regionally.

Clearly, innovation and the ability to deliver superior client service is not the sole preserve of the global firms. It is up to local African firms to determine how they will compete in the future, to leverage those areas where they have competitive advantage, in South Africa and the rest of the continent.

Millard is a Director of Cambridge Strategy Group in England. robert.millard@camstrategy.com.