Judith Mason's 'The Man Who Sang and the Woman Who Kept Silent' (popularly known as the 'Blue Dress'), one of the signature works of the Constitutional Court Art Collection (CCAC), relates to the telling of stories of trauma, and also to the search for, and meaning of truth.

The executions of two anti-apartheid movement cadres by the security police, Harold Sefola and Phila Ndwandwe, as described at the Truth and Reconciliation Commission (TRC), inspired Judith Mason to make this artwork.

Harold Sefola was electrocuted with two comrades in a field outside Witbank. As a dying wish he requested to sing 'Nkosi Sikelel' iAfrika', now part of the national anthem of South Africa. His killer said: "He was a very brave man who believed strongly in what he was doing." The braziers in the one oil painting stands as a representation of Sefola's flame that was forcefully put out.

Phila Ndwandwe, an Umkhonto we Sizwe general, was shot by security police after apparently being kept naked and tortured in an attempt to make her inform on her comrades. It was also believed that she used a plastic bag to cover herself and preserve her dignity.

When the artist heard Ndwandwe's story through a radio newscast, she collected discarded blue plastic bags and sewed them into a dress. On the skirt of the dress she wrote a poem to Ndwande, writing that plastic bags everywhere are memorials to Ndwandwe's courage.

In 2016, a law clerk at the Constitutional Court, Douglas Ainslie, was so taken by the story of Phila Ndwandwe that he set off on a path to uncover the story of her murder as documented in TRC records. He found that there was some reason to doubt the narrative being told about the artwork, and that there had been testimonies that would make it appear that Ndwandwe was not tortured, didn't use a plastic bag to fashion panties, nor that she was (as the title of Mason's piece portrays) "the woman who kept silent" by refusing to offer testimony.

The artist acknowledged that although the 'facts' conveyed at the time of the work's production have subsequently been called into doubt, the imagery is not meant to be read literally. Instead, the symbolism is open to different interpretations. The hyena in the oil paintings symbolise both the security police but also a psychopomp, a spiritual guide of a person's soul.

The artwork calls upon an emotional reading in order to evoke empathy. Upon production of two additional plastic dresses in 2016 (due to the original having started to disintegrate) the artist added burn marks on one of the new dresses, using a magnifying glass, in order to signify the neverending task of truth-seeking, as in the work of the Constitutional Court, adding another layer to the artwork. 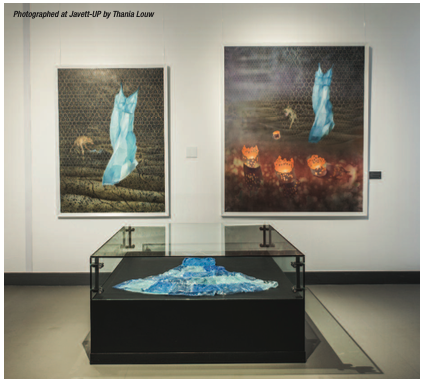