To describe the recent Banksy trade mark judgment as an unusual one would be an understatement. But I suppose you'd expect nothing less from a case dealing with one of the world's most interesting living artists.

For the benefit of those who are unfamiliar with the phenomenon, Banksy is the name used by a graffiti/street artist who has a habit of leaving interesting artworks in public places – these works tend to be done overnight when no-one's looking. Banksy is really famous; there are even Banksy museums. What adds to the allure is that no-one knows who Banksy is – I suppose his mother knows, but Banksy's circle is apparently very small. Now that I think of it, what if Banksy is a she?

There is a very famous Banksy artwork called The Flower Thrower. This artwork depicts what looks like a protester lobbing something in anger. The surprising aspect of it is that what the protester is lobbing is a bouquet of flowers. You'll find this striking artwork on a wall in Jerusalem, where it's been since 2005. 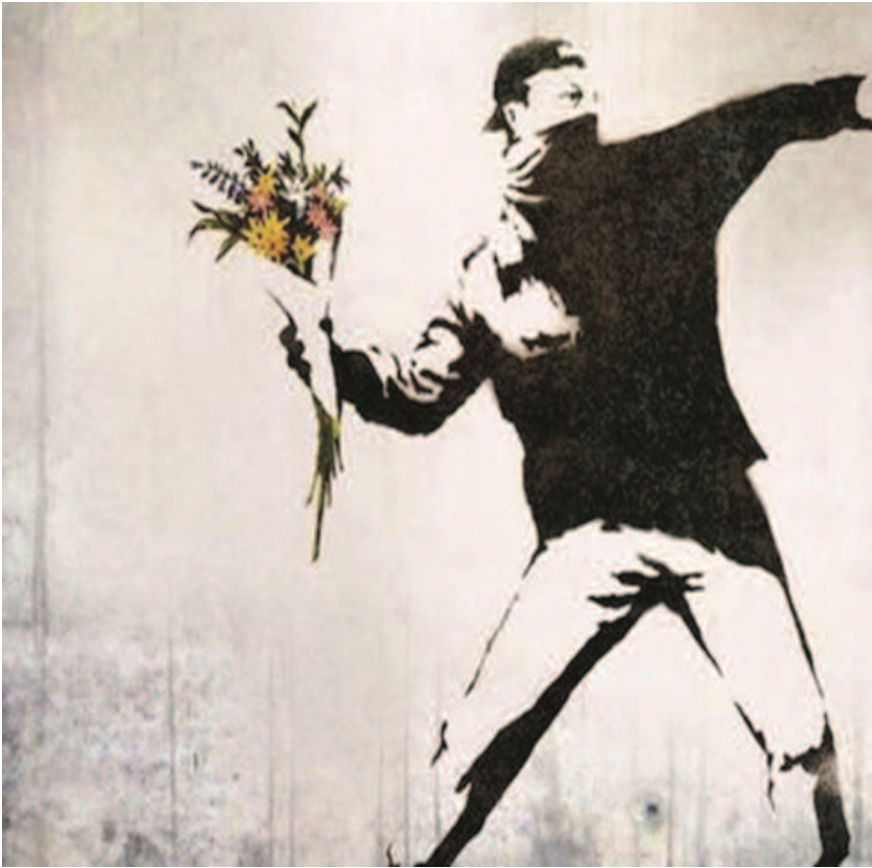 In 2014, Banksy filed an EU trade mark application for this artwork. A range of classes were covered – 2, 9, 16, 18, 24, 25, 27, 28, 41 and 42, thus seeking protection for obvious commercial outlets such as artworks, printed matter, clothing and entertainment services. Banksy didn't file the trade mark in his own name, but rather in the name of a company called Pest Control, thereby retaining anonymity. The application went through to registration.

In 2019, a greeting card company called Full Colour Black applied to cancel this registration. The basis of the attack was bad faith. The arguments were numerous and technical – there had never been any intention to use the artwork as a trademark, it had never been used as a trade mark, and it had only ever been reproduced as an artwork. There was a suggestion that The Flower Thrower trade mark had been registered simply to get legal protection without having to rely on copyright law, something that would've required Banksy to reveal his identity, and indeed be stuck with a time-limited right (something that isn't the case with a trade mark registration, which can be renewed indefinitely).

Apparently, in response to this attack, Banksy did start making some commercial use of the trade mark. In 2019, he opened a pop-up shop in London called Gross Domestic Product. An unusual name for an unusual retail outlet – you can apparently look at artworks from the outside but you can't go in (did they have inside info about a pandemic?), you then place your order online, but only after making some sort of declaration that the work will be not be resold.

For reasons that one can only guess at, Banksy let it be known publicly that he had established the pop-up store "for the sole purpose of fulfilling trade mark categories under EU law", a motivation described as "possibly the least poetic reason to even make some art." Banksy may have thought that he'd retain some cred by saying that. But why would he publicly admit that he filed a trade mark application without any intention of using it, when the law is quite clear that anyone filing a trade mark application must have a genuine intention to use it?


There is an aspect of the case that has attracted a great deal of attention, and that is the claim by Full Colour Black that Banksy once made this statement: "Copyright is for losers". Obviously, the suggestion here was that this showed a complete disregard for, and disinterest in, intellectual property rights; so clearly the trade mark had been improperly registered.

So, how did Banksy deal with this regrettable outburst? Well, his lawyers argued that actions and words cannot change the law, and that the law quite simply is that the proprietor of a right can assert those rights. Besides, European law protects freedom of expression. The Cancellation Division, in fact, did not make a great deal of this issue.


Although it clearly wasn't overly impressed by the comment, describing Banksy as "very vocal regarding his disdain for intellectual property rights", it did say that the remarks "did not annul any validly acquired rights". But those had, of course, already been annulled by the lack of intention to use.