By By Deal Makers, Published in Deal Selection

Advanced Health disposed of Advanced Vergelegen Surgical Centre to Hibosys, operating as Summerhill Surgical Centre. The 18,15 million disposal is in line with the company's restructuring plans and decision to dispose of underperforming facilities.

Insimbi Industrial repurchased 18,46 million of its shares at R0.008125 per share from the sellers of Group Wreck International Non-Ferrous. Insimbi acquired a 90% stake of Group Wreck in 2018 for R120 million. Subsequently a number of claims against the sellers and the effects of the pandemic have resulted in the business of Group Wreck being adversely affected. Parties have agreed to settle the Warranty Claim with the repurchase of shares and will acquire the remaining 10% of Group Wreck for R350,000.

MTN announced the conclusion of an agreement to dispose of its 20% stake in Belgacom International Carrier Services SA (BICS) to Belgium firm Proximus for €100 million (c.R1,8 billion). BICS was classified as a non-current asset held for sale.

Orion Minerals entered into an exclusive option to undertake a due diligence and acquire a 56.25% interest in Southern African Tantalum Mining. Other shareholders include the Industrial Development Corporation (43.75%).

Sibanye-Stillwater made an initial phased equity investment of €30 million for an c.30% equity shareholding into Keliber, whose wholly owned advanced lithium project located in the Kaustinen region of Finland, is one of the most significant lithium-bearing areas in Europe. Sibanye has a guaranteed option to achieve a majority stake in Keliber following the completion of the undated feasibility study by contributing further equity financing.

DKR, a German property company with REIT status in Germany has been granted a secondary inward listing on the Main Board of the JSE with effect from March 8, 2021. The DKR real estate portfolio consists of 165 convenience retail properties with a gross lettable area of c. 901,016m² and a market value of c. €880 million.

Huge Group announced a decision to apply for admission of its share to trading on the Alternative Investment Market of the London Stock Exchange. The company intends to retain its primary listing on the JSE and A2X with a secondary listing on AIM.

Orion Minerals undertook a two-tranche share placement to raise $25 million at $0.036 per share. The funds will be used to advance Orion's strategy of re-establishing the Northern Cape Province as a globally significant copper producer.

African Rainbow Energy and Power, acquired a 40% stake in SOLA Group, making it the largest individual shareholder. The investment further expands AREP's presence in the renewables sector in which it is focused on clean energy solutions.

Tyme, the South African-based digital banking network for emerging markets, has received $110 million (R1,6 billion) in a Series B capital raise, laying the foundation for Tyme's expansion across ASEAN. The new investors include Apis Growth Fund II, a private equity fund managed by Apis Partners and Gokongwei-led JG Summit Holdings of the Philippines. They will become minority shareholders each with 14.9% and 5.13% respectively. Following the completion of the transaction ARC Financial Services will hold c.59% stake.

Across the rest of Africa.....

Kenya: Bioline Agrosciences, a world class player in biological control, has announced the acquisition of Dudutech from Flamingo Group International for an undisclosed sum.

Madagascar: Terra Mauricia and Kibo Fund led a consortium of minority investors in the exit of a 16% stake in Orange Madagascar, a leading mobile operator in francophone Africa, listed on the Malagasy market. The disinvestment comes 10 years of supporting Orange's growth into a dominant player in voice and data services for individuals and businesses and via its subsidiary Orange Money Madagascar, a leading financial service provider.

Morocco: Mediterrania Capital Partners, a private equity firm focused on growth investments for SMEs and mid-cap companies in North Africa and sub-Saharan countries, sold its remaining stake in Moroccan-based Cash Plus. The stake in the independent money transfer company was sold to a group of Moroccan family offices. 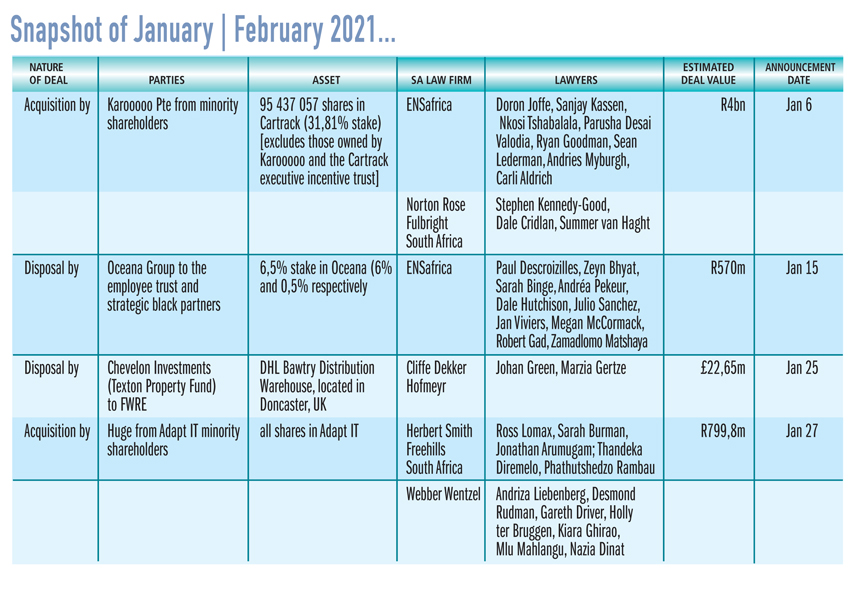