Fatal fines during a pandemic Quarter 1 2022

The COVID-19 pandemic had a disastrous effect on South Africa's economy. In 2020, South Africa's Gross Domestic Product contracted by 7%, resulting in more firms winding up their businesses than in 2019. Fragile firms facing such challenges may not be able to absorb a competition law fine.

The respondent firms in these cases may not be able to pay a possible fine at this economically challenging time.

This article explores the factors to consider when raising a firm's inability to pay a competition law fine. For this purpose, the Competition Act's fining provisions are briefly described to show that the statutory cap is a blunt instrument in preventing fatal fines. From this context, the Commission's approach to fatal fines is considered.

An essential element of the Commission's approach to fatal fines is the exit of the firm following a fine. To better understand this element, guidance from the European Union ( EU) and South Africa's company laws is provided below.

Section 59(2) of the Competition Act limits competition law fines to a maximum amount, so that they don't jeopardise the firm's viability. Section 59(2) caps such fines at 10% of the firm's South African turnover in its most recent financial year. The Competition Appeal Court ( CAC) confirmed the purpose of this cap by stating that a fine:

"should not, on its own, be destructive of the offending party's business; hence the restraint of the cap." ( Southern Pipeline Contractors and another v The Competition Commission 105/CAC/Dec10;106/
CAC/Dec10) 33 para 61).

The CAC did, however, accept that a fine below this statutory cap may still jeopardise the firm's viability. The court acknowledged that the 10% cap is a "blunt instrument to achieve this constraint" and contemplated firms validly raising the destructive effect of a fine below this cap ( Macneil Agencies (Pty) Ltd v Competition Commission (121/CAC/Jul12) 34 para 85). Following the CAC's comments, the Commission considered fatal fines in its 'Guidelines for the Determination of Administrative Penalties for Prohibited Practices' ( GN 323, Government Gazette 38693, 17 April 2015 (Effective 1 May 2015). Issued in accordance with s79(b) of the Competition Act)(CC's Fining Guidelines).

The CC's Fining Guidelines state that the Commission will consider a firm's ability to pay when the fine would:

"irretrievably jeopardise the ability of the firm concerned to continue trading and exit… [where] that may lead to a significant reduction in competition." 1

Based on this, the essential elements of the Commission's approach to fatal fines seems to be:


This article focuses on the exit of the firm following a fine (LE Quilliam The factors to be considered by the competition authorities when a fine may cause the firm to exit (LLM Dissertation, Rhodes, 2021 for further detail on this and other factors)).


The EU's approach is considered below as the CC's Fining Guidelines seem to borrow certain concepts from this jurisdiction. Then a firm's exit in terms of South Africa's company laws is briefly described.

The EU has similar competition laws to South Africa. The EU may impose fines for competition law infringements, but these fines cannot exceed 10% of the firm's turnover. Within this context, the EU will consider a firm's ability to pay a fine where:

"the imposition of the fine…would irretrievably jeopardise the economic viability of the undertaking concerned and cause its assets to lose all their value." (Guidelines on the Method of Setting Fines Imposed Pursuant to Article 23(2)(a) of Regulation No 1/2003 (2006) OJ C210/2 para 35).

The EU's "economic viability" seems analogous to "ability … to continue trading" in the CC's Fining Guidelines. The EU doesn't define "economic viability" but provides useful indicators of a firm's ability to continue trading. These indicators are profitability, capitalisation, solvency and liquidity. The EU views liquidity and solvency indicators as the most useful (J Almunia, J Lewandowski "Information Note: Inability to pay under paragraph 35 of the 2006 Fining Guidelines and payment conditions pre-and post-decision finding an infringement and imposing fines", European Commission, SEC(2010) 737, 10 June 2010).

Liquidity and solvency indicators include the current liquidity ratio

and the debt-equity solvency ratio

. These financial ratios do, however, have their blind-spots.

Financial ratios are normally based on backwards-looking financial statements which are constructed from historical data. Relying on only one ratio provides a myopic view of the firm's previous financial position and may result in faulty interpretations. Multiple ratios, however, may conflict and give ambiguous results. To address weaknesses in financial indicators, weighted financial ratios are combined for greater reliability. 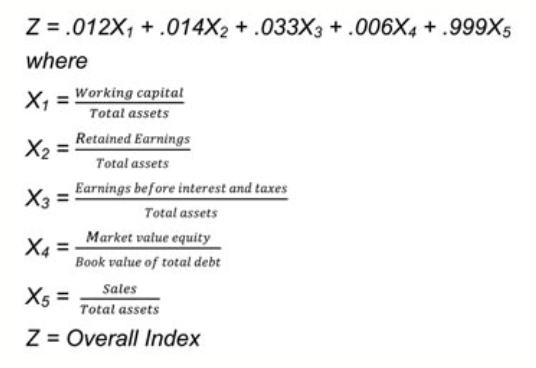 Firms with a Z-score over 2.99 are unlikely to exit, but a score below

1.81 portends to the firm's exit EI Altman "Financial Ratios, discriminant analysis and the prediction of corporate bankruptcy" (1968) Vol 23(4) The Journal of Finance 589 at 606).

However, the Z-score indicates bankruptcy and not necessarily exit. Z-scores indicate the likelihood of bankruptcy in terms of United States (US) bankruptcy laws. Chapter 11 bankruptcy in the US contemplates a firm's possible recovery in certain circumstances, e.g., a creditors' compromise. Similarly, firms in South Africa may avoid exit through winding-up by entering business rescue.

Exit of firm in South Africa

A company ceases to exist when it is removed from the CIPC's Companies Register after being wound up. This process is regulated by the 1973 Companies Act and applies to insolvent companies. A company may be wound up if it is commercially insolvent.

Commercial insolvency occurs when a company cannot pay its debts. This arises when a company does not have:
"liquid assets or readily realiszable assets available to meet its liabilities [including contingent and prospective liabilities] as they fall due to be met in the ordinary course of business and thereafter to be in a position to carry on normal trading…" ( ABSA Bank Ltd v Rhebokskloof (Pty) Ltd and others 1993 (4) SA 436 (C) 440F-J).


Such commercial insolvency is different to factual insolvency. Factual insolvency occurs when a company's liabilities exceed its assets. However, the courts have cautioned that "the valuation of assets, other than cash, is a notoriously elastic and often highly subjective one" ( Boschpoort Ondernemings (Pty) Ltd v Absa Bank Ltd 2014 (1) All SA 507 (SCA) 513 para 17), and that "there are undoubtedly very many companies operating exceedingly successfully in the real business world [while factually insolvent]" (Ex parte Strydom No: In re central Plumbing Works (Natal) (Pty) Ltd and others 1988 (1) SA 616 (D) 623D-E).

Business rescue has two alternative goals. The first is to return the company to commercial solvency and normal trading. If this is not possible, then the firm is wound up. The company is wound up through business rescue when it benefits creditors more than the above 1973 Companies Act process. A company will cease to exist at the end of business rescue only if the second goal is realised. Only after the second goal is reached will the firm fulfil the essential element in the CC's Fining Guidelines.

COVID-19 has created a challenging environment for South Africa's firms. Firms facing such challenges may be unable to pay competition law fines even below 10% of the firm's turnover.

When faced with a fatal fine, a firm needs to show that the fine will cause its exit as it will be unable to continue trading. The EU's approach to fatal fines suggests that certain financial indicators and the Altman Z-score may predict a firm's exit following a fine. However, such indicators have their limitations and should be supplemented by further evidence. This evidence includes the firm's commercial insolvency following the fine.

Commercial insolvency exposes a firm to winding up or business rescue.

Commercial insolvency is, generally, a harbinger of a firm's exit through deregistration. However, a firm may continue trading after business rescue if the process returns the firm to commercial solvency. In this way, commercial insolvency, generally, precipitates a firm's exit from a fine, except if the business rescue process can succor the firm back to health.

This article only proposes points to consider when analysing fatal fines. I look forward to seeing how the competition authorities grapple with this issue and whether the above plays any role in their thinking.