I am increasingly frustrated by the concerted effort that is being made by female activists to portray the trial of an alleged rapist as deeply prejudicial to women generally. And I am really fed up when people who should know better come out with crappy statements such as that made by Lisa Vetten in The Star (Monday, March 27) in which she claims that rape is "the only crime where some of the burden of proof is borne by the victim."

Despite the great industrial and financial pressure placed on two West Coast farmers who took on Distell subsidiary, Die Bergkelder, over the right to use the bocksbeutel bottle shape, they stood their ground and won a landmark decision in the Supreme Court of Appeal.

Early in March, Albert Pegg of Safmarine cautioned South African businesses not to be overoptimistic about the oil and gas boom in West Africa (Cape Times, March 2). This boom has been driven primarily by the post 9-11 strategic interests of the United States of America coupled with the high oil prices, and the two have encouraged extensive engineering investment in deep water wells off the West African coast.

The Oregon Supreme Court has upheld a voter-approved referendum which gives compensation rights to land owners adversely affected by land-use restrictions that are enacted and enforced after they acquire title to the land. It was held that the law does not impermissibly usurp the government's power to regulate land use. The law gives the government body that imposed the restrictions a choice of paying the loss in value or removing the restrictions once a land owner makes a request. – Charles Delafuente, March 3

In what could be a first for a City magic circle firm, Allen & Overy has just taken on a former Playboy model as one of its associates.

The lawyer used to work for a Canadian firm. She recently left the firm, and was snapped up by A&O which, like many major firms, is finding Canada to be fertile recruiting ground at the moment.

What A&O didn't know was that prior to her legal career she had worked as a nude model, and had appeared in Playboy's 2002 "Girls of Canada" issue.

A spokesman for A&O told us that this had happened "many years before she joined the firm," and as far as A&O was concerned is "completely unconnected to her ability as a first class lawyer". He did not comment on whether there would be a 2006 "Girls of A&O" calendar.

Yes, a diabetic can be a fire-fighter Labour Law April 2006

In a relatively recent decision, the Labour Court held that the City of Cape Town's policy not to appoint any persons who suffer from diabetes which is treated with insulin as fire-fighters, was discriminatory and unfair.

Nothing escapes the tax net – not even bribes Tax April 2006

With recent scandals erupting at Volkswagen, Germany, and the Thales and Zuma corruption trials hovering in the background, corruption and bribery always seem to be in the news. But how is a bribery payment treated for tax purposes?

Machines that have a tax persona Tax April 2006

The term "permanent establishment" (PE) is an international tax concept specifically relevant in the context of Double Tax Agreements. Typically, a DTA will provide that any business profits derived in the other contracting state by a tax resident will be taxable in the resident state. However, to the extent that the particular business profits are attributable to a PE in the other contracting state, these may be taxed in the other state.

How will tax self-assessment impact on the cost of doing business? Tax April 2006

In his recent 2006 Budget address, Finance Minister Trevor Manuel announced that the SA Revenue Service plans to modernise the corporate income tax system with a move towards a full self-assessment system.

Those in positions of trust involving a duty to protect the interests of another, are not permitted to make a secret profit at another person's expense or place themselves in positions in which their interests conflict with their fiduciary duty (Robinson v Randfontein Estates Gold Mining Co Ltd 1921 AD 168).

South Africa is poised to enter the software escrow world – a business activity that has mushroomed in Britain and the United States.

The Supreme Court of Appeal in Parsons Transport (Pty) Limited v Global Insurance Company Limited recently considered whether the payment of a premium under a contract of insurance was a pre-requisite for the coming into existence of a valid and binding contract of insurance. 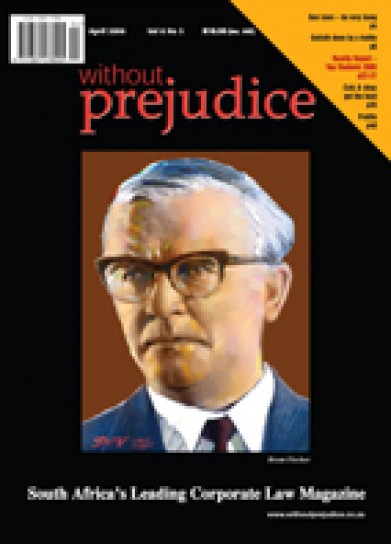