Along with many citizens, I was appalled this month by the photographs and televised reports of security guards on the rampage in Cape Town while on their way to deliver a monograph to Parliament complaining about their pay and conditions of service.

The Da Vinci Code, written by American author Dan Brown and published in 2003, has proven a humdinger of a novel.

Three may keep a secret, if two of them are dead.

Employers are constantly looking for opportunities to reduce their liabilities and maximise profit. After all, profit-making is the paramount object of establishing an enterprise.

Numerous fatalities, injuries, the murders of two SA Transport and Allied Workers Union (Satawu) members, the torching of two train carriages and various other vehicles, the stoning of vehicles, the attempted derailing and petrol-bombing of other Metrorail trains and, as without prejudice was being prepared for the presses, the riots in Cape Town's city centre.

A recent case in the Labour Court has reaffirmed the constitutional commitment that racism – and in particular in the workplace – shall not be tolerated.

Fringe benefits – home is where the heart is Tax June 2006

The South African Income Tax Act contains a comprehensive set of provisions relating to the taxation of fringe benefits for employees.

The broad test to determine the deductibility of an amount, as approved by the Appeal Court (CIR v African Oxygen), is:

It is a truism that "time waits for nobody." Now, even s103 can admit to that.

Various standard-form building contracts contain the option of, or a requirement for, a dispute between the parties to be determined by way of arbitration.

Purchasing property in South Africa has become an expensive affair, at least for South Africans. For foreigners, the property market is still a best buy.

There's a man who hangs around a certain high-end Johannesburg shopping centre who has on more than one occasion threatened – very aggressively, it must be said – to sue the centre management for clamping his vehicle.

Practical pressures of business regularly cause parties to implement agreements before they have recorded the terms in writing.

South Africa is currently in the middle of a well-documented consumer explosion. 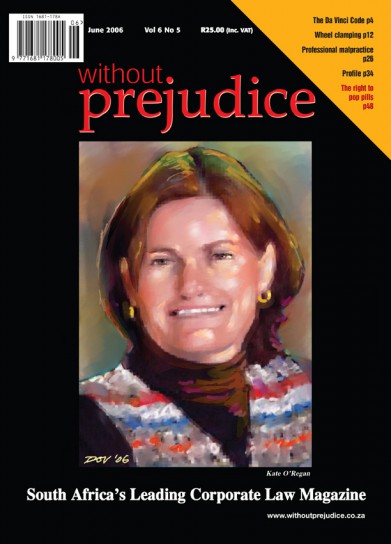