Last year without prejudice reported that the only breeding pair in the world of Black or Verreaux's eagles in an urban area, in the Walter Sisulu National Botanical Garden in Roodepoort, were under threat from development.

It is well-known that a proven way to discourage certain behaviour is to tax it. One could then be forgiven for believing that an effective way for government to reduce pollution is to introduce environmental taxes. Though the basic principle seems simple enough, the practicalities involved in implementing “green taxes" are complex.

Law and the Underworld Not The Law Reports April 2007

JUDGEMENT IN Rich v The Gautrain Company Foss-Harbottle J: It was inevitable with the Gautrain that,virtually before the turning of the first sod, the first sod (as defendant's counsel described him) turned up at court. The plaintiff, Mr Rich, complains that the defendant intends to run the Gautrain three metres below ground beneath his elegant and expensive home, thus causing him a nuisance. The plaintiff has an optimistic view of my judicial powers. None of my decrees to date have persuaded the moles underneath my lawn to go and be a nuisance elsewhere. If I find myself persuaded, however, I will see if I can do better in this case.

No escaping the critical role of trustees Trust Law April 2007

The scandal that has enveloped the Fidentia group of companies and its chairman J Arthur W Brown, has highlighted the critical role of trustees in trust schemes. Over the past few years several high profile case studies on how the lack of proper oversight has led to an increased abuse of trust schemes, have littered our landscape. The Fidentia Group of companies controlled about R2bn in funds, of which at least R680m was in client funds, including money meant for mineworkers' widows and orphans that is unaccounted for.

In a recent case, the Appeal Court ruled that where a Trust wished to purchase immovable property, it could only do so if the trustee who signed the sale on behalf of the Trust had written authority so to act.

There were some significant changes in the recent Budget with regard to estate planning: the estate duty threshold was increased from R2,5m to R3,5m and the donations tax exemption raised from R50 000 to R100 000. The 2007 Budget did not announce any new relief for trusts, which are still taxed higher than individuals and companies, at a flat rate of 40%.

The effect of a higher threshold and reduced rate for estate duty, combined with a tax regime that is more favourable to individuals than to trusts, has led in recent years to the perception that trusts are dead as an estate planning tool. This is simply not the case. There remain various compelling reasons to make use of a well-structured and properly-managed trust in state planning, particularly for special cases where a person is incapable of managing their affairs or earning their own income, to minimise the compounding of asset value in spouses' estates and to help to educate grandchildren.

Let me preface this article by stating categorically that – only every now and again – I too find myself creeping over the designated speed limits on our urban roads.

It has long been a thorny issue as to whether quadbikes can travel on public roads, more particularly in secured residential estates.

Though the National Road Traffic Act, 1996, makes provision for the registration and licensing of quadbikes, in practice, the Mogale City Licensing Department has been instructed by the Vehicle Testing Station Automotive Department of the SABS Regulatory Services not to issue licences or roadworthy certificates for quadbikes.

The notorious 'fourteen-day rule', under regulation 2(1)(c) of the Road Accident Fund (RAF) regulations, in terms of which 'hit-and-run' victims must submit an affidavit to the police within 14 days of the motor vehicle accident, recently came under fire by the Constitutional Court (the 'CC') in the case of Renier Albertus Hermanus Engelbrecht v the Road Accident Fund and the Minister of Transport (CCT 57/06).

Engelbrecht's misfortune on February 22 2002, when his motor vehicle was involved in a collision with a truck whilst travelling on the road between Clanwilliam and Citrusdal, wasn't unique. As happens at many accident scenes, the truck driver didn't stop and Engelbrecht was unable to establish either the identity of the truck's owner or of the driver. Engelbrecht was injured in the collision and was hospitalised for a couple of days.

Bearing in mind the wealth of known mineral resources in Mozambique, the government has laid down incentives for mining activity as one of the priorities in revitalising the economy. These were set out in Resolution 4/98 of February 24 (Geology and Mining Policy) with the following state priorities:

Former US President Bill Clinton has rolled his way into the dollar millionaire stakes. It's been revealed that he has pocketed an estimated $40m since 2001. This makes him the highest paid after-dinner speaker in the world. Over 2006 he delivered 325 speeches – almost one a day.How times change. When Harry Truman left the White House (succeeded by 'Ike' Eisenhower) he went with a fond farewell and an Army pension of $112. Truman took a bank loan to help him manage the transition from supreme to ordinary citizen. He later wrote that he could never lend himself to any transaction “that would commercialise on the office of the presidency."

There is concern in the US that judges' salaries at federal and state levels are not kept consistently high enough to keep the “best and the brightest" on the bench. The Chief Justice considers this to have become a constitutional crisis threatening to undermine the strength and independence of the federal judiciary. Good judges are said to be leaving the bench because of financial pressures. Judicial salaries have declined in real terms by 25% from 1969 to 2006 and annual cost-of-living adjustments have failed to keep judges up with pay increases in other sectors. Federal district judges are paid about half of what deans and senior law professors at top law schools are paid and a fraction of practising lawyers. Unfortunately neither the article nor the Report mentions the actual salaries.
– James Podgers, February 16

Cross-dressing Kiwi lawyer Rob Moodie has found himself in trou- ble again after releasing a court-suppressed document to the media. The lawyer, who last year changed his name to Miss Alice as a

protest against the old-boys' network prevalent in New Zealand legal circles, was defending two elderly clients who were being sued after the collapse of an army-built bridge on their property. The report laid the blame for the collapse squarely at the door of the army and Moodie claimed that his actions were justified as the report was in the public interest.

Unfortunately, the jury didn't agree, finding him guilty of con- tempt of court. Moodie now faces a fine of $NZ5,000 and a three- month suspension from practice.

Through-out the proceedings Moodie dressed as Alice in Wonderland. "Pomp, self-importance and deference to the court (are allowed to) eclipse the truth" he said, nibbling the edge of a mushroom.

Are you in an employment relationship, or are you selfemployed? The answer may not be as clear-cut as you believe.

On December 1 last year NEDLAC issued a Code of Good Practice which sets out guidelines for determining whether a person is an employee or not.

s200A of the Labour Relations Act, headed “Presumption as to who is employee," makes it clear that if one or more of certain factors are present – regardless of the form of the contract – a person is presumed to be an employee.

In the recent CCMA arbitration of National Union of Mineworkers obo Sekgoeng and Impala Platinum Ltd, the commissioner considered the consequences of the dual relationship that a shop steward has with his employer. On one hand he is an employee and on the other he is an office bearer of a registered trade union. The two relationships differ vastly in nature. 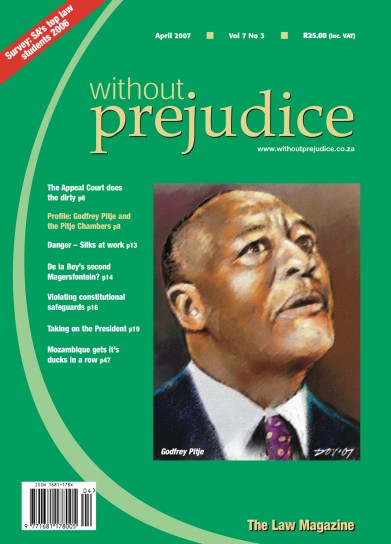