Later this year five of the judges serving on the Constitutional Court will have completed their 15 years tenure and will be put out to pasture. The ball will then be squarely in President Jacob Zuma's court (an accidental but apposite pun) – it's up to him to select an incoming team (as it were) from among recommendations made by the Judicial Services Commission.

Legal aspects of the hosting of the Sports Law June 2009

Recent media reports criticising by-laws to be passed by the nine host cities for the 2010 FIFA World Cup South AfricaTM seem to suggest a capitulation by the South African government to the dictates of the world governing body for football, the Fédération Internationale de Football Association (FIFA).

The very soul of justice The Law June 2009

A judgement of crucial significance for the constitutional values of openness and transparency and the principle of open justice was handed down by the South Gauteng High Court recently. As a result, the recent hearing into the complaint lodged with the Judicial Service Commission (JSC) by the Constitutional Court judges against Judge John Hlophe, the judge president of the Western Cape High Court, and Judge Hlophe's countercomplaint against the Constitutional Court judges, was open to the public and the media.

In what circumstances will the court allow the applicant to introduce new facts into its replying affidavit? This was one of the issues that had to be determined by the High Court in the recently decided case of Aeroquip South Africa (Pty) Ltd v Andre Gross, Rousseau Nell & Lombard Attorneys and Johannes Jacobus Rousseau.

History and Justice The Law June 2009

This is the second part of the edited text of remarks made to a UCT Alumni Leadership Forum, Johannesburg April 2009; the first part appeared in the May issue Each of these four strands of memory contributes to our modern conception of justice. The first two, by and large, weaken the project of constructing a sense of justice, while the latter two, again by and large, strengthen it. The most important contemporary contributor to that conception, though, is our Constitution. And it is to the Constitution, and the manner in which it engages with these strands of memory to which I now turn.

Undesirable and unlawful possession, use and/or decimation of pornographic material and/or child pornography at the work place is a punishable offence for which an employer may “summarily dismiss" an employee.

There are persuasive arguments in favour of scra pping the offence of criminal defamation. Perhaps the most cogent is that it poses a significant threat to freedom of expression, a threat that is particularly difficult to justify given that there is an effective civil remedy to compensate those who suffer injury to their reputations.

In 2008 LBC Wise Counsel held a series of debates around the UK on the theme of value for in-house lawyers. These debates took place in Leeds, Manchester, Birmingham, Milton Keynes, Bristol, Reading, Fareham and Maidstone – nearly 20 events across the country held under Chatham House* rules with an invited audience of in-house lawyers. This article summarises some of the key findings:

If you confirm and then cancel, you’ll have to pay anyway Platteland Perspective June 2009

HEAVEN knows, an inn-keeper's task is not an easy one. For one thing, the average hostelry owner has to make up for two thousand years of bad press: who would dare turn away a carload of desperate people with a crying baby on the back seat on the grounds that the inn was full?

Foss-Harbottle J: Wedding receptions are meant to be cheerful affairs. They are times for unbridled joy – while it lasts.

Companies, including law firms, carry social and environmental responsibilities. Most large firms handle their social duties quite well through, for example, bonus pay structures for staff and pro bono work. 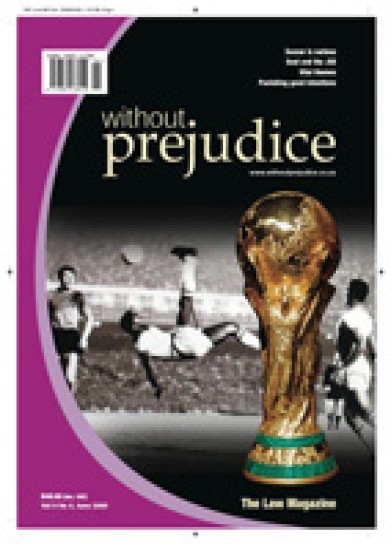