Will expatriate South Africans be allowed to vote in this year's general election? The issue is to be settled by the Constitutional Court sometime in March and, though the matter seems, on the face of it, straightforward, it is, in fact, rather more complex. I expect that a number of "freedoms" supposedly enjoyed by South Africans will be subjected to examination and the opinions that will be presented will provide intriguing perspectives on both the Constitution and on the Court itself. Seen in the context of one paradigm, the Court is, in any vent, "political," in the same sense as is the US Supreme Court. "The only thing we wait for," observed one lawyer in conversation with me, "is to receive the reasoning behind the decisions it makes." This alarmed me, but there is certainly evidence to support the view.

Criticism of the judiciary Letters March 2009

Sir In its December issue, without prejudice carried a health risk warning for those who may be inclined to criticise the judiciary (Criticism of the Judiciary, p5). This was followed by a public appeal from the Chief Justice that critics should not impugn the integrity of the Bench. This is a salutary general rule and fits the constitutional admonition that:

That dividend withholding tax: rearrangements might be prudent Tax March 2009

As part of the South Africa Revenue Services' (SARS) move towards a dividend withholding tax, an anti-avoidance measure was introduced in the recently promulgated Revenue Laws Amendment Act in the form of a passive holding company (PHC). The concern raised by SARS is that the new withholding tax system would present arbitrage opportunities for individuals to interpose a company in which to house their investments; company-to-company dividends will be exempt and companies are taxed at a lower rate of 28% as opposed to a maximum individual rate of 40%.

By now, many will have heard something about contributed tax capital (CTC). A year or so hence, the concept will form part of the South African tax terrain – to the relief of tax practitioners who have had to trawl through the Income Tax Act's three-to-four page long definition of a dividend. I certainly heaved a sigh of relief when I read the Revenue Laws Amendment Bill of 2008.

Any companies have a corporate social responsibility programme in place to assist the less fortunate members of society and also to finance the arts and cultural events. So, what tax consequences arise when a business makes a decision to finance the arts or cultural events? The Income Tax Act (58 of 1962, as amended) does not contain specific incentives to encourage businesses to invest in the arts. Reference must be made, therefore, to the general rules governing donations made to so-called Public Benefit Organisations, as defined in s30 of the Act.

This is the last in a four-part series

Consumer spending reduced dramatically as a result of the global economic downturn (significantly aided, I have to observe, by the repeated increases in interest rates imposed by the SA Reserve Bank – Ed). VAT receipts by most Revenue Authorities have also been negatively affected and in South Africa a substantial deficit compared with the budget of R167 billion is expected for 2009.

The housing backlog is probably one of the greatest challenges facing government. In an attempt to encourage the private sector to invest in housing and thereby reduce this backlog, tax incentives have been introduced to stimulate expenditure on housing.

Has the Judiciary been actively activist? The Law March 2009

The judgement of Nicholson J in Zuma v National Director of Public Prosecutions1 and the subsequent appeal to the Supreme Court of Appeal has provided the backdrop against which philosophies of judicial decision-making have been juxtaposed and debated. The result, which is noticeably "knee-jerk" in character, has been to paint the Zuma decision with the activist brush and the Appeal Court's decision with a minimalist one. But the recent decisions of the KwaZulu-Natal High Court and the Appeal Court do not accurately, if at all, illustrate the difference between the concepts of activist judicial decision-making and judicial restraint.

Opening the door to the law The Law March 2009

The shape of things to come Intellectual Property March 2009

Shape trade marks have been a part of the South African trade mark landscape since the adoption of the Trade Marks Act (194 of 1993). The Act laid the foundation for the registrability of trade marks consisting of containers for goods and shapes of goods. This article will focus on the legislative and juristic framework that governs the registrability of shape trade marks. Specific attention will also be given to the recent European Court of First Instance decision in Lego Juris v OHIM – Mega Brands (Lego Brick) (T-270/06).

It sometimes happens in practice that A, albeit the first user of a mark, is using it only on a fairly modest scale. B then commences use of a similar mark on a massive scale, inter alia, by way of television advertisements and inserts in major national newspapers. It stands to reason that B could, within a few weeks, establish a significant reputation relating to the mark. It also follows that there could be confusion in the market. From whose perspective should the matter be approached?

The latest decision on the patent matter between pharmaceutical manufacturers Lundbeck and Cipla Medpro has again gone against Lundbeck. The case highlights the importance of amending the claims of a South African patent as soon as possible so they con- form to the amended claims of a corresponding patent that has been examined in another jurisdiction or has been amended as a result of litigation.

We are all leaders now Management March 2009

The difference between what is a “leader" and what a “manager," and what is “leadership" and “management" is the stuff of consulting heaven. It is a debate that has spawned thousands of books, articles and workshops...and no doubt there are still careers that will be made for the man or woman who can coin an original bon mot to capture the very essence of the distinction...

Part one of a two-part series the old adage 'when it rains, it pours' is certainly true of the current state of the financial world. In the US, Japan and Europe, a 'blue Monday' seems to have morphed into a 'blue Tuesday', 'blue Wednesday' – you get my drift. Though Finance Minister Trevor Manuel reportedly told the Sunday Times that he is “pretty confident" that South Africa can avoid a recession, he also warned that things probably would get worse before they got better. 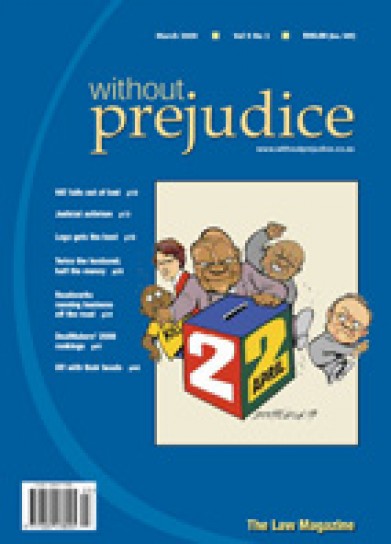