Looking back at the different roads people could have taken often makes for a salutary lesson, sometimes it brings with it a sense of relief that the decision taken brought such a positive outcome.

In Alert Level 3 lockdown there remain stringent parameters on how companies, even though now permitted to trade, may conduct their business operations.

The COVID-19 pandemic has had an unprecedented impact on the South African economy. Although necessary, the measures that have been employed to deal with the novel coronavirus, which include a nationwide lockdown, have resulted in several companies and businesses feeling the pinch. Despite government's efforts to ameliorate these challenging conditions through various social relief and economic support packages, South African companies and businesses remain under enormous pressure, with many facing the harsh reality of financial distress. It comes as no surprise, therefore, that companies are increasingly turning to business rescue.

South Africa, and the world at large continue to be rocked by the COVID-19 pandemic. One of the hardest hitting consequences of COVID-19 is the impact on businesses throughout South Africa following the national lockdown. Almost no sector remains untouched and businesses in all sectors have been hit hard.

In March of this year ,the World Health Organisation declared COVID-19 a global pandemic. In response to this, the South African government announced and implemented a state of disaster and a resultant lockdown of the country to attempt to curb the spread of the disease. This imposed restrictions on the movement of people and the South African economy and, as referenced in a public briefing by President Ramaphosa, "caused...much suffering and required much sacrifice". South Africa has now moved from a "hard lockdown" to a risk-adjusted approach, based on levels of varying degrees of risk.

It is a common principle in South African company law that a company is managed by its board of directors. The Board bears the responsibility for the functioning and management of the company and is ultimately accountable for its performance. However, the Board's collective responsibility does not exclude the individual responsibility and liability of each of the directors. Where the company performs poorly due to the dishonesty, recklessness or gross negligence of the Board, individual directors may be held jointly and severally liable for breaching their fiduciary duties as contemplated in the Companies Act, 2008, and for those individuals who are directors of State Owned Entities (SOEs), the Public Finance Management Act, 1999 (PFMA).

Increased focus on governance of state-owned entities (SOEs) was sparked by the judgment in Organisation Undoing Tax Abuse and Another v Myeni and Others (15996/2017) [2020] ZAGPPHC 169 (27 May 2020) and the announcement that President Cyril Ramaphosa formed the Presidential State-owned Enterprises Council aimed at supporting government in repositioning SOEs 'as effective instruments of economic transformation and development' (11 June 2020).

With more employees working from home during the COVID-19 pandemic, the risk of cybercrime has escalated, and the need to have proper systems and procedures in place has become even more important.

The outbreak of the coronavirus (COVID-19) pandemic has raised many questions around insurance coverage with regard to COVID-19 related losses, exposures and liabilities.

The Wisconsin Supreme Court struck down the state's stay-at-home order, ruling that the health official who issued the order should have followed rule-making procedures that involve the legislature in decision-making. In a majority ruling of 4-3, the court said that the stay-at-home order by the health services secretary was unenforceable because she did not follow rule-making procedures. Under that process, a state legislative committee has the authority to block the regulations. Rule-making exists to ensure that a controlling, subjective judgment asserted by one unelected official is not imposed on the state. The health services secretary exceeded her authority under a statute governing her department and its powers to fight communicable diseases. The court also remarked that the governor's emergency powers are not limitless. In the case of a pandemic, which lasts month after month, the governor cannot rely on emergency powers indefinitely.

Liverpool Football Club was confirmed as Premier League champions for the first time in 30 years.

Judith Mason's 'The Man Who Sang and the Woman Who Kept Silent' (popularly known as the 'Blue Dress'), one of the signature works of the Constitutional Court Art Collection (CCAC), relates to the telling of stories of trauma, and also to the search for, and meaning of truth.

Quotations from the Bible, from written handouts provided by law teachers in the 1990s and by a popular gospel musician about the several ways a traveller could reach Gweru – a reader could be forgiven for being confused, even led astray, by a recent decision from the Harare High Court.

On 17 April, the Supreme Court of Appeal delivered an interesting judgment in Minister of Environmental Affairs and Another v ArcelorMittal South Africa Limited (342/2019) [2020] ZASCA 40 (17 April 2020) regarding the evolution of the waste management legal framework. What are the legal repercussions of the judgment?

Since 1 April 2019, the Pension Funds Adjudicator has been empowered to apply the principles of equity in dealing with complaints. The concept of an equity jurisdiction has raised concerns in the industry due to its discretionary nature. 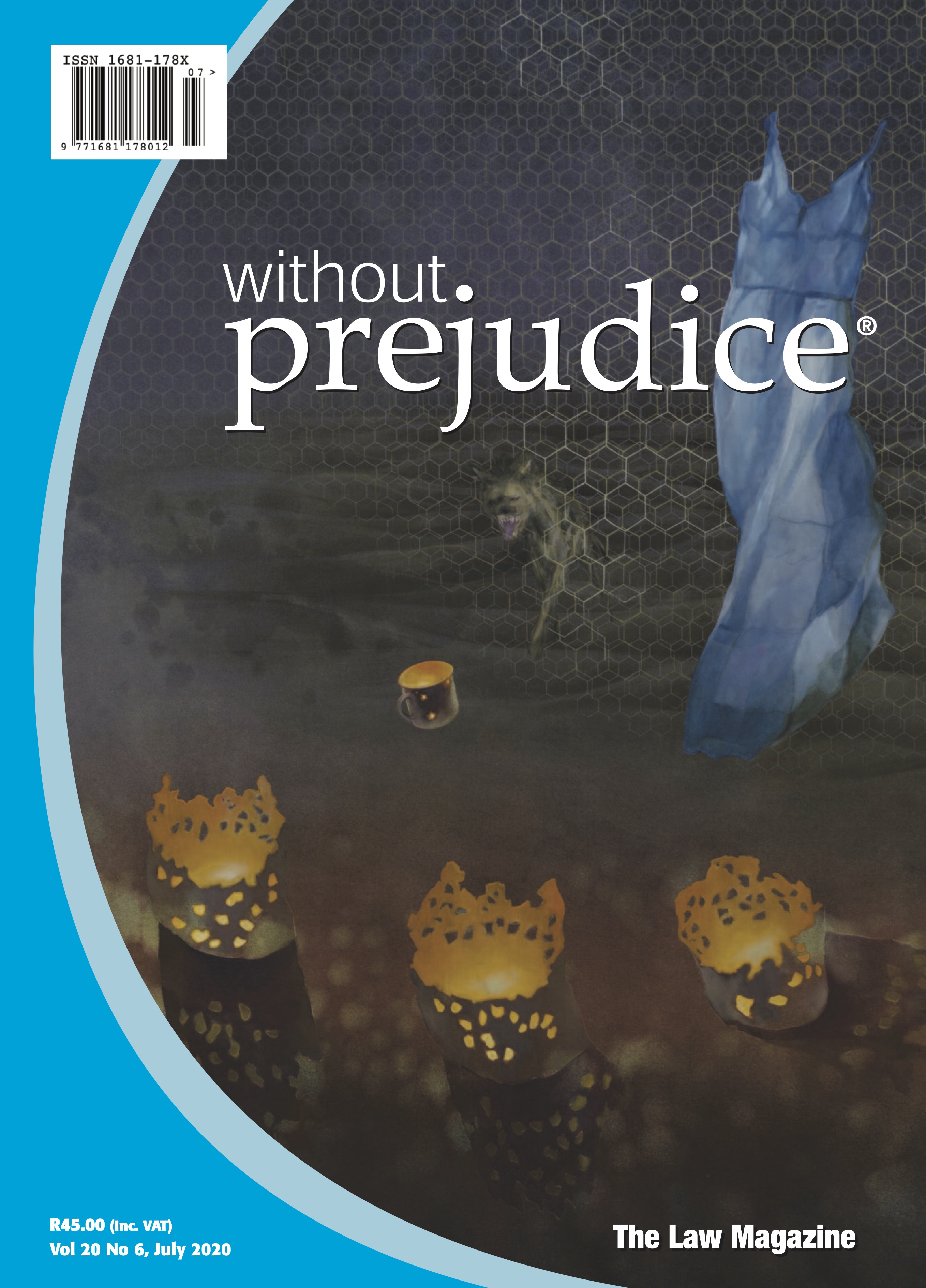